Recovering from this pandemic means rebuilding hope for the future 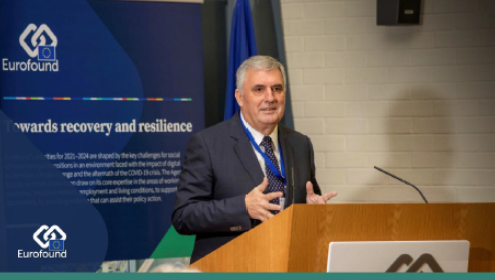 The key word across Europe in response to the 2008 economic crisis was “austerity’, and its damaging legacy was borne mostly by young people. The key words in policy post-pandemic are “recovery’ and “resilience’ – key themes of the 2022 European Social Services Conference. They mark a diametrically opposite approach that promises to be much more effective and human oriented. However, we need to study and understand the blow young people have suffered from this pandemic, in order to adjust recovery and resilience measures to their needs and equip them with the tools to actively shape their present and future. Recent research by Eurofound demonstrates the vulnerabilities of young people in terms of job stability, social inclusion and mental well-being. After the immediate anti-crisis measures, issues that were put on the backburner, because controlling the spread of the virus was paramount, are resurfacing and need to be addressed. Chief among them is this precarious position of Europe’s youth: without prioritising them in the present, we have little hope for the future.

A useful expression in English advises us to “make hay while the sun shines’ – to take action when times are good so that you have security when times are bad. Unfortunately, the various crises and disruptions over the past several years blurred the boundaries between “good’ and “bad’ times – the time to invest and the time to tighten belts – which confounded efforts to build and apply much-needed policies. However, it is never too early and never too late to address important issues, and certainly youth policies count among those important issues.

When the COVID-19 pandemic hit, youth employment figures were still recovering from the 2008 crisis. Progress on employment rates, gender equality in employment and reducing the proportion of young people not in employment, education or training (NEET) was tentative, but tangible. And then the shock produced by the lockdowns reversed the trends of increasing cohesion, further deepening the gaps between different groups in society.

Temporary workers – particularly those in non-teleworkable jobs such as service, sales and hospitality jobs and blue-collar jobs – were disproportionately impacted by COVID-19 job loss, accounting for three-quarters of net job loss in the EU in 2020. At the same time, workers with permanent jobs in teleworkable white-collar occupational categories were largely spared from unemployment.

A joint study by Eurofound and the European Commission Joint Research Centre shows that, in total, there were five million fewer jobs in the EU in spring 2020 than a year earlier, with this reducing to a deficit of just over three million jobs by the end of the year. The decline in employment was sharpest among young workers and low-paid female workers.

The labour market fallout of the pandemic represented a perfect storm for Europe’s youth. In 2019, the largest proportions of younger workers (aged 15–29) were employed, for the most part, in the sectors that would soon be worst affected by the pandemic – 13% worked in accommodation and food services, 11% in wholesale and retail, and 10% in arts and entertainment. Most of these jobs were either put on hold or shed with the lockdowns. Another large group of young workers (11%) worked in the health and care services sector, where long hours, challenging working conditions and job burnout peaked during the pandemic. More than half of young people in the EU had temporary (34%) or short-term (22%) contracts, and these were often the first to go when businesses closed their doors and laid off staff.

The impact of the pandemic on the labour market led to a rise in unemployment among 15- to 29-year-olds of 1.4 percentage points in 2020 to 13.3%, a much larger increase than among the older population. The NEET rate also increased, by 1.2 percentage points to 13.7%.

The storm in the jobs market and the high levels of stress experienced by young people, even by those who kept their jobs, resulted in very worrying figures one year after COVID-19 hit. In spring 2021, 17% of unemployed or inactive young people in the EU reported that they were likely to lose their accommodation because they could not afford it, 39% had no savings at all and 43% experienced difficulties making ends meet. Over half of them lived with their parents, which provided security for some vulnerable young people, albeit at the cost of their independence.

Prior to the crisis, younger people scored higher on well-being and life satisfaction indicators than the older population. The opposite is now the case: people in the EU aged 18–34 report being more likely to feel depressed, lonely and anxious than those aged 35 and over. They also exhibit lower levels of resilience in dealing with problems in life. There is now a youth mental health crisis in Europe, and recovery in the mental well-being of young people is unlikely to be as linear as the recovery in the economic indicators. Policymakers hoping that they have time to address the concerns of the young generation, thanks to the trust of young people in institutions and their traditional optimism about the future, may find that such hopes are built on foundations of sand.

Stark findings, but we should not underestimate the number of jobs that have been saved during the pandemic by state intervention and the fiscal support it provided, as well as the mass shift to telework. There were also measures focusing on young people. Immediate action was taken at European level, with specific funding targets for youth set by the European Social Fund. National-level initiatives were pursued to keep young people in education, provide apprenticeships and increase access to social protection. However, many measures implemented to date have been temporary, to reduce the vulnerability of young people to the crisis. Now we need longer-term measures – such as permanent improvements in access to work and measures to increase job security.

Besides the work-related policies, younger people in Europe need tailored and dedicated support to raise families – with the Child Guarantee a very appropriate proposal in this regard – to find accessible housing, and perhaps most importantly, to deal with high levels of stress and looming mental health problems.

The wide-ranging and ambitious actions required to future-proof the current generation of young people cannot simply be imposed on citizens from on high. The Conference on the Future of Europe is a citizen-led series of debates and discussions that enables people from across Europe to share their ideas and help shape a common future. It provides a forum to understand the concerns of citizens and draw the necessary mandate to take decisive actions. Likewise, the European Year of Youth 2022 is an opportunity to specifically involve young Europeans in the important decisions that impact them. It tells them that policymakers do not simply profess in the abstract that young people are the future, but acknowledge them as the present.